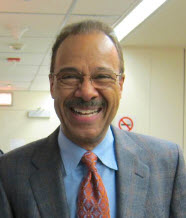 Christian Spencer is a native of Newport News, Virginia. He received a Bachelor of Arts Degree in English and a minor in journalism, from Hampton University and taught English at Stony Brook School in Long Island, for one year before launching his television career.

(A little known fact: he was a major league baseball prospect, in college. )

He began his television career in 1971 in Richmond, Virginia, as a news reporter at WWBT-TV, covering state and local politics, the public-school system, and landmark cases in the Fourth US Circuit Court of Appeals.

After 22 years in New York, he headed for the Bay Area and landed at KGO-TV -ABC 7 in San Francisco. It has been his home since 1999. He was a co-host of Channel 7’s “The View from the Bay” from 2006-2010. He has written and published a series of children’s books, and had the opportunity to indulge his passion for wine, as the host of Spencer Christian’s Wine Cellar on HGTV from 1995-1999.

Last year, he released his memoir entitled “You Bet Your Life: How I Survived Jim Crow Racism, Hurricane Chasing, and Gambling.”